In this Spoken English lesson you will learn some useful English Idioms and Vocabulary to speak in English about the - Rich, Poor and Misers. This English class will bring you idiomatic expressions to help you learn to speak English more fluently and confidently.

Meaning - To have a great deal of money.
Example - My new neighbor is extremely loaded.

Sitting on a gold mine.

Meaning - to have or own something that is very valuable
Example - When property prices doubled in our area, we suddenly realized we were sitting on a goldmine.

To have money to burn.

Meaning - To have a lot of money and spend large amounts on things that are not necessary. Example - Mitchell's new boyfriend seems to have money to burn. He's always buying her extravagant gifts.

To be as poor as a Church mice.

Meaning - Someone who is extremely poor.
Example - My aunt is as poor as a church mouse.

Meaning - To completely run out of money and other assets.
Example -This company is going to go broke if you don't stop spending money foolishly.

Meaning - To live on very little money, often in order to save up for something big.
Example - We had to scrimp and save in order to send the kids to college.

A Scrroge
Meaning - Someone who spends as little money as possible and is not generous
Example - He's a mean old scrooge!

Note - Scrooge is a character who hates spending money but learns how to be generous, in the book "A Christmas Carol" by Charles Dickens.

A skinflint
Meaning - A skinflint is someone who only shops at bargain stores, never orders dessert, and in general hates spending money.
Example - My boss is a penny-pinching skinflint.

Meaning - Someone not wanting to give or spend money. You can also call them stingy or cheap.
Example - The company's tightfisted owner won't raise the workers' salaries.

We hope this English Lesson is useful to you and you have learnt some new words those would improve you English speaking skills. 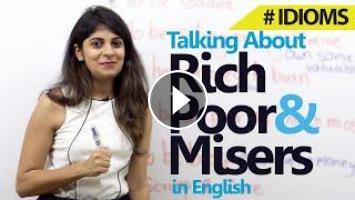