ava
Compressing simple molecular solids with hydrogen at extremely high pressures, University of Rochester engineers and physicists have, for the first time, created material that is superconducting at room temperature.

Featured as the cover article in the journal Nature, the work was conducted by the lab of Ranga Dias, an assistant professor of mechanical engineering and of physics and astronomy.

Dias says developing materials that are superconducting—without electrical resistance and expulsion of magnetic field at room temperature—is the “holy grail” of condensed matter physics. Sought for more than a century, such materials “can definitely change the world as we know it,” Dias says.

In setting the new record, Dias and his research team combined hydrogen with carbon and sulfur to photochemically synthesize simple organic-derived carbonaceous sulfur hydride in a diamond anvil cell, a research device used to examine miniscule amounts of materials under extraordinarily high pressure.

The carbonaceous sulfur hydride exhibited superconductivity at about 58 degrees Fahrenheit and a pressure of about 267 billion pascals, about a million times higher than a typical automobile tire pressure. This is the first time that superconducting material has been observed at room temperatures.

“Because of the limits of low temperature, materials with such extraordinary properties have not quite transformed the world in the way that many might have imagined. However, our discovery will break down these barriers and open the door to many potential applications,” says Dias, who is also affiliated with the University’s materials science and high-energy-density physics programs.

-Power grids that transmit electricity without the loss of up to 200 million megawatt hours (MWh) of the energy that now occurs due to resistance in the wires
-A new way to propel levitated trains and other forms of transportation
-Medical imaging and scanning techniques such as MRI and magnetocardiography
-Faster, more efficient electronics for digital logic and memory device technology

“We live in a semiconductor society, and with this kind of technology, you can take society into a superconducting society where you’ll never need things like batteries again,” says Ashkan Salamat of the University of Nevada Las Vegas, a coauthor of the discovery.

The amount of superconducting material created by the diamond anvil cells is measured in picoliters—about the size of a single inkjet particle.

The next challenge, Dias says, is finding ways to create the room temperature superconducting materials at lower pressures, so they will be economical to produce in greater volume.

First discovered in 1911, superconductivity gives materials two key properties. Electrical resistance vanishes. And any semblance of a magnetic field is expelled, due to a phenomenon called the Meissner effect. The magnetic field lines have to pass around the superconducting material, making it possible to levitate such materials, something that could be used for frictionless high-speed trains, known as maglev trains.

But the superconducting materials used in the devices usually work only at extremely low temperatures—lower than any natural temperatures on Earth. This restriction makes them costly to maintain—and too costly to extend to other potential applications. “The cost to keep these materials at cryogenic temperatures is so high you can’t really get the full benefit of them,” Dias says.

Previously, the highest temperature for a superconducting material was achieved last year in the lab of Mikhail Eremets at the Max Planck Institute for Chemistry in Mainz, Germany, and the Russell Hemley group at the University of Illinois at Chicago. That team reported superconductivity at -10 to 8 degrees Fahrenheit using lanthanum superhydride.

Other coauthors on the paper include lead author Elliot Snider ’19 (MS), Nathan Dasenbrock-Gammon ’18 (MA), Raymond McBride ’20 (MS), Kevin Vencatasamy ’21, and Hiranya Vindana (MS), all of the Dias lab; Mathew Debessai of Intel Corporation, and Keith Lawlor of the University of Nevada Las Vegas. 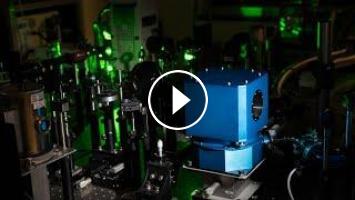 Compressing simple molecular solids with hydrogen at extremely high pressures, University of Rochester engineers and physicists have, for the first ti...