ava
In a landmark speech today (10 Sep) United Nations Secretary-General António Guterres said, “Climate change is the defining issue of our time – and we are at a defining moment,” adding that “if we do not change course by 2020, we risk missing the point where we can avoid runaway climate change, with disastrous consequences for people and all the natural systems that sustain us.”
Speaking at UN Headquarters in New York, the Secretary-General said “scientists have been telling us for decades. Over and over again. And far too many leaders have refused to listen. And far too few have acted with the vision the science demands.”
He said noted that “as climate change intensifies, we will find it harder to feed ourselves” causing “more and more people will be forced to migrate from their homes as the land they depend on becomes less able to support them.” He added that “this is already leading to local conflicts over dwindling resources.”
Guterres called on governments, businesses, scientists and that will put the planet on a path to a better future.
He said “the commitments made so far by Parties to the Paris Agreement represent just one-third of what is needed. The mountain in front of us is very high. But it is not insurmountable. We know how to scale it. Put simply, we need to put the brake on deadly greenhouse gas emissions and drive climate action.”
Guterres also outlined his vision for a new Climate Summit in 2019, which he will be convening to rally the international community, to step up action in key areas inclusive sustainable energy production, economic growth, green investment and better stewardship of natural resources.
He said, “enormous benefits await humankind if we can rise to the climate challenge” and added that the argument that tackling climate change is expensive and could harm economic growth “is hogwash.” In fact, he said “the opposite is true.”
The call for greater ambition on climate action comes amid record temperature rises and extreme weather events across the globe. The last few months alone saw devastating floods in southern India, wildfires in the United States and extreme heatwaves in Japan.
Guterres said, “we stand at an existential crossroad. If we are to take the right path – the only sensible path -- we will have to muster the full force of human ingenuity” and stressed that “technology is on our side in the battle to address climate change.”
He pointed out that “the transition to a cleaner, greener future needs to speed up” and said that infrastructure investment must be “sustainable or we will lock in a high-polluting dangerous future.”
Guterres said “every day we fail to act is a day that we step a little closer towards a fate that none of us wants -- a fate that will resonate through generations in the damage done to humankind and life on earth. Our fate is in our own hands. The world is counting on all of us to rise to the challenge before it’s too late.”
When world leaders signed the historic Paris Agreement on climate change in 2015, they pledged to stop temperatures rising by more than 2 degrees Celsius above pre-industrial levels, and as close to 1.5 degrees, as possible. But scientists and a major UN study, indicate that the target is already well off-track.
The UN chief’s message also comes ahead of the Global Climate Action Summit, to be held on the west coast of the United States, in San Francisco, from 12-14 September. National, regional and municipal leaders will gather with business people and philanthropic communities to underscore their commitment to climate action. 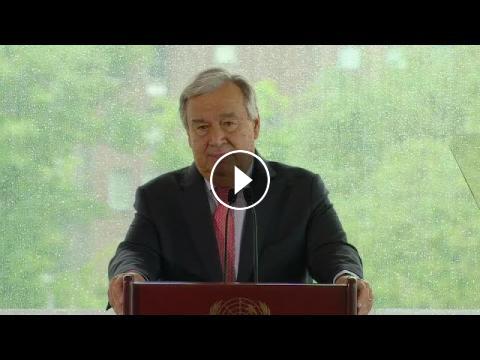 In a landmark speech today (10 Sep) United Nations Secretary-General António Guterres said, “Climate change is the defining issue of our time – and we...