ava
Daily Press Briefing: Gaza, Yemen, Security Council, Deputy Secretary-General Travel, Syria, & UNHCR
Briefing by Farhan Haq, Deputy Spokesperson for the Secretary-General.
GAZA
Nickolay Mladenov, the UN Special Coordinator for the Middle East Peace Process, said on Twitter today that the UN is working closely with Egypt and all concerned to ensure that Gaza steps back from the brink.
He warned that the escalation in the past 24 hours is extremely dangerous and reckless. He said that the firing of rockets must stop and that restraint needs to be shown by all, adding that no effort must be spared to reverse the spiral of violence.
In a statement we issued last night, the Secretary-General urged all parties to exercise maximum restraint.

YEMEN
The Secretary-General’s Special Envoy for Yemen, Martin Griffiths, today welcomed reports of the reduction of hostilities in and around Hodeidah city, stressing that this is a crucial step to prevent further humanitarian suffering and to build a more enabling environment for the political process.
He called on all parties to the conflict to show continued restraint, adding that the people of Yemen have suffered enough.
Mr. Griffiths said that he is confident that the parties are ready to work on a political solution. He is encouraged by the constructive engagement received from all sides, noting that the logistical preparations are under way to prepare for the forthcoming round of consultations.
He also reiterated that the UN stands ready to re-engage the parties on a negotiated agreement for Hodeidah which would protect the port and preserve the humanitarian pipeline.
In a separate statement, Emergency Relief Coordinator Mark Lowcock echoed Mr. Griffiths’ sentiments, asking that the parties implement a cessation of hostilities, not least in and around all the infrastructure and facilities on which the aid operations and commercial imports rely.

SECURITY COUNCIL
This morning, the Security Council held an open meeting on Iraq.
In his final briefing to the Council as the Secretary-General’s Special Representative, Ján Kubiš said that, while the government formation process has not been without controversy, political blocs have demonstrated a willingness to act in support of incoming Prime Minister Adel Abdul Mahdi.
Mr. Kubiš said that competition and differences have been largely political and not sectarian, and, in this way, a break from the past.
He also commended the exemplary peaceful transfer of power between the outgoing Prime Minister, Haider al-Abadi, and the new Prime Minister.
As we have announced, Mr. Kubiš will be succeeded by Jeanine Hennis-Plasschaert of the Netherlands.
This afternoon, the Security Council will meet on the Democratic Republic of the Congo and will receive a briefing from the Secretary-General’s Special Representative, Leila Zerrougui. 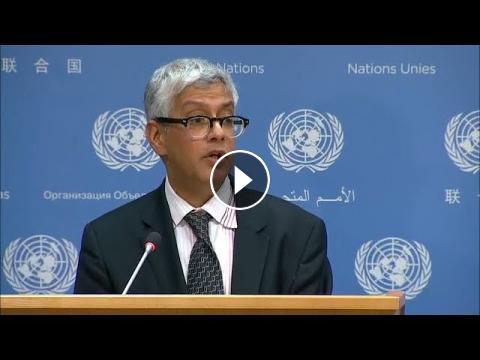