ava
United Nations - “A strong and united Europe is an absolutely fundamental pillar of a strong and effective United Nations," said United Nations Secretary-General António Guterres, addressing Members of the European Parliament in Strasbourg (France) on 17 May 2017.
The United Nations Secretary-General said that global challenges such as the multiplication of conflicts, a human rights violations, climate change and globalisation required the EU and the UN to work together.
In his speech Guterres expressed his gratitude and appreciation for the EU's commitment to multilateralism and its contributions to development cooperation and humanitarian aid: “The European Union is clearly the most successful project of peace sustainability in the world since the beginning of history."
The UN Secretary-General addressed a number of issues, notably Syria, migration, globalisation and the need to preserve cultural diversity. 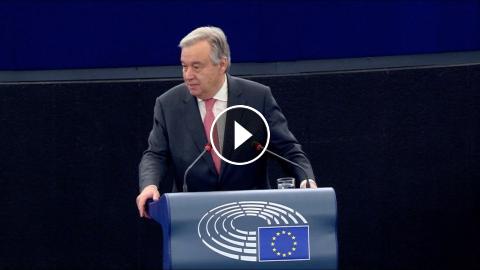