ava
Rodney Scott’s daring approach and “we’ll figure it out” fearlessness has been the foundation upon which his Rodney Scott’s Whole Hog BBQ restaurant (@rodneyscottsbbq) empire was built. Watch this interview to learn about winning a James Beard award, the truth behind becoming an “overnight” celebrity, and how cooking with soul is vital to sustained success.

Rodney Scott is a Restaurant Influencer —

At Rodney Scott’s BBQ, “Every Day is a Good Day.” Beginning life in smalltown Hemingway, SC, the famed pitmaster began cooking whole hog barbecue as a young teen. He worked in his family restaurant for 25 years before branching out on his own.

However, that decision did not come without challenges, which were covered in his groundbreaking cookbook, Rodney Scott’s World of BBQ: Every Day Is a Good Day. As the title suggests, though, Scott found a way to pull triumph from the temporary grips of adversity and “find courage through frustration”.

“The best part about it was I said it all, I told it all.” Rodney Scott says of the therapy writing a book provided while being interviewed on the Restaurant Influencers podcast with Shawn P. Walchef of https://calibbq.media.

“I had people walk up to me saying, you said what I was afraid to say. You've really shown me a different way to handle this thing. I want to try to make the situation better.”

Inspiration and extreme skill has paved the way for Rodney Scott and his restaurant empire to accomplish amazing feats. Named one of Bon Appetit’s 50 Best New Restaurants and winning a prestigious James Beard Award for Best Chef: Southeast in 2018, his rise to stardom may appear to be meteoric. But as is the case with most alleged overnight successes, unseen blood, sweat, and tears were shed before much of the public recognition began.

“It's not overnight.” Rodney Scott says of his continued hard work and success. “My overnight (success) took 33 years.” As a man in his early 50s, that is a good portion of his life.

Rodney Scott is now a certified celebrity pitmaster. He’s been featured on Netflix, the Food Network, and has even cooked barbecue with Al Roker. Not to mention working alongside other famous pitmasters from across the globe. Rodney also has a sauce line and spice rub collection, and has partnered with country music artist Eric Church to open a sixth location on a rooftop in Nashville, Tennessee.

Even though he’s been working toward this his entire life, Rodney Scott is just beginning. His impact on BBQ, and food, in general is resonating across the globe.

And you know what? There is no reason to believe he won’t figure out a way to make it happen.

NOMINATE A RESTAURANT INFLUENCER — Do you know someone or a restaurant who is great on social media? Let us know by emailing [email protected] or sending the @calibbqmedia team a DM on social media.

ABOUT RODNEY SCOTT (@rodneyscottsbbq):
Rodney Scott is the founder of Rodney Scott’s BBQ and author of Rodney Scott's World of BBQ: Every Day Is a Good Day. After an extensive career in the barbecue business, the pitmaster and entrepreneur stepped away from the family business to open his first restaurant in 2017 in his home state of South Carolina. Since then, he has won a James Beard Award for Best Chef in the Southeast and opened four additional locations. With his sixth, and most ambitious location, Scott is proving his mantra correct. Every day is indeed a good day.

ABOUT RESTAURANT INFLUENCERS:
Welcome to the Restaurant Influencers podcast and video series. Every week host and restaurant owner Shawn P. Walchef (@shawnpwalchef) talks with leaders about their secrets to Smartphone Storytelling and how to show up and engage where customers are spending time online. https://restaurantinfluencers.media

Restaurant Influencers is brought to you by Toast, the powerful restaurant point of sale and management system that helps restaurants improve operations, increase sales and create a better guest experience.

• Learn more about Toast at https://bit.ly/3vpeVsc 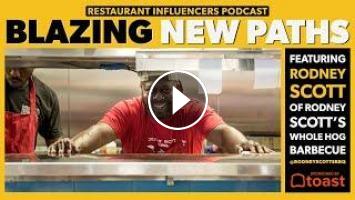 Rodney Scott’s daring approach and “we’ll figure it out” fearlessness has been the foundation upon which his Rodney Scott’s Whole Hog BBQ restaurant (...