ava
Statement by Mr.Mark Lowcock, Under-Secretary-General for Humanitarian Affairs and Emergency Relief Coordinator, at the High-Level Pledging Event on Yemen 2019.
Today donors pledged US$2.6 billion to ensure that humanitarian operations in Yemen can be sustained and scaled up at a time when humanitarian aid is the only lifeline for millions of Yemenis. This is an increase from last year's total pledges of US$2.01 billion, 100 per cent of which were fulfilled. Most donors (16 so far) have increased their pledges with significant increase from KSA, UAE, UK, EU, Germany and Canada.
The 2019 Humanitarian Response Plan for Yemen requires $4 billion to reach 21.4 million people who are bare surviving, with more than half of the funding going towards emergency food aid for 12 million people - a 50 per cent increase compared to last year.
The conflict is taking an enormous toll on women and children. “Children did not start the war in Yemen, but they are paying the highest price. Some 360,000 children are suffering from severe acute malnutrition, fighting for their lives every day (...) And as in all humanitarian emergencies, women and girls are suffering a crisis within a crisis. They are at increased risk of sexual and gender-based violence, and of child marriage. More than two-thirds of Yemeni girls are married before they turn 18, up from 50 percent before the conflict started.”
"The women and girls of Yemen are among those suffering, they are among the victims of this crisis, but they are also part of the solution”, said in his opening remarks UN Humanitarian Chief Mark Lowcock. “One of the things we are doing in the Humanitarian Response Plan this year is designing our intervention in such a way that women and girls can play their part as the solution. And I do encourage you, as you are thinking about how to execute your pledges, to think about the ways in which you are going to help us make that possible.”
Last month, the Emergency Relief Coordinator allocated $32 million from the Central Emergency Response Fund to ramp up humanitarian logistical operations. Today’s pledges will ensure that humanitarian partners across Yemen reach even more people whose suffering is unspeakable.
"I hope that, a year from now, what we will be able to discuss is progress in building a better future for the people of Yemen", said ERC Lowcock, "whether we can do that depends on what happened today and through the rest of the year, but the people of Yemen deserve a better future." 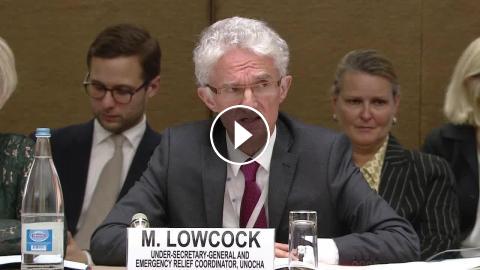 Statement by Mr.Mark Lowcock, Under-Secretary-General for Humanitarian Affairs and Emergency Relief Coordinator, at the High-Level Pledging Event on Y...