There are certain things that really fascinate you and you are completely filled with wonder.The word 'enthrall' basically means to charm or to fascinate.
When something keeps you completely interested and you give it all your attention, it means it enthralls you.

It also means to enslave or to make someone a slave. If a feeling or an idea enthralls someone, it influences everything that they think or do.
The word 'enthrall' is a verb, its past form is enthralled and past participle is enthralled. Enthralling is an adjective that describes something of being fascinating , enthrallingly is an adverb.

For example, when a book or a movie enthralls you, it means it delights or fascinates you.
When a drug addiction has completely enthralled someone, it means they have become a slave of drugs .

Example 01 : The film director won an award for his enthralling action packed reality based film.

Example 02 : The little boy was enthralled by the colorful fireworks display on the new years eve.

Example 03 : The manager enthralled his team with a humorous speech while giving his presentation.

Example 04 : Maria's father told her, " We are all enthralled with the news of your promotion at work."

Example 05 : The final baseball match enthralled the spectators as it was a very close one.

Example 06 : 'Titanic' is one the most enthralling movies made in the recent past.

Example 07 : Natty can't get over her enthralling mountain hiking experience she had during her summer camp.

Example 08 : Mrs. Baker was a popular professor at the university, she taught the most boring subjects enthrallingly.

Example 09 : The roller coaster ride at the amusement park was an enthralling experience.

Example 10 : In the twenty first century, we are completely enthralled by the power of computing technology.

Example 11 : 'Titanic' is one of the movies with the most enthralling movie in the recent past.
Have you ever been enthralled by something? 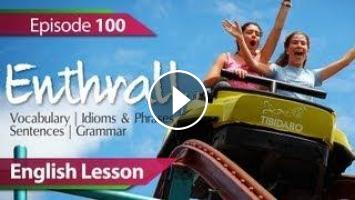 Daily Video Vocabulary Episode 100 - Enthrall There are certain things that really fascinate you and you are completely filled with wonder.The word 'e...