Korean Food in Nepal at a Korean Restaurant in Pokhara

lily
Come join us for lunch as we eat Korean food in Nepal at a Korean restaurant called Hanguk Sarang (한국 사랑) in Pokhara (पोखरा), Nepal (नेपाल). Although the food wasn't totally authentic it was definitely close enough and the views from the rooftop and service were an added bonus. We ended up ordering Kimchi Fried Rice (kimchi-bokkeum-bap - 김치볶음밥), Tonkatsu (돈까스) and Kimchijeon (김치전) as our mains which came with a lot of Korean side dishes known as banchan (반찬). Overall, all of that food including drinks came to just over $10 US dollars so we'd definitely recommend this as a filling affordable meal in Pokhara.
Hankook Sarang
J P Road | Thamel, Kathmandu 44600, Nepal
+977 1-4256615
GEAR WE USE
Olympus OM-D E-M5 II:
Canon G7X:
Olympus 14-150mm II Lens:
Rode Video Mic GO:
Joby Gorilla Pod:
SanDisk 16GB Extreme Pro:
SOCIAL MEDIA & TRAVEL BLOGS
AUDREY:
blog:
instagram:
facebook:
twitter:
SAMUEL:
blog:
facebook:
twitter:
instagram:
Korean Food in Nepal at a Korean Restaurant in Pokhara Travel Food Transcript:
So if you have been following our Korea video series you're going to be excited about this video because today we are having Korean food in Nepal. Oh yes!
So we've been hanging out in Pokhara and there are so many Korean restaurants here. A plethora.
Every few meters. So apparently this is a really popular destination with Korean travelers and we thought hey we haven't had Korean food in a while let's try it.
So this restaurant is called Hanguk Sarang (한국 사랑). And I think it means love of Korea. Because normally I would say it should be Hanguk Saranghae or Hanguk Sarang Haeyo but that is what I'm guessing. Hanguk Saram means Korean person. So I think it is Hangkuk love. Love of Korea.
And we're hoping that the food here is good and authentic. Oh, yes.
What up yo?
So what I'm enjoying about this restaurant even before we get our food is just the fact that we've got a traditional Korean table. Low to the ground. Low to the found with pillows and mats.
This is great. And the views here are stunning. Like from this second floor of this building we're getting like mountain views. You can even see the lake off in the distance. You can see paragliders. So this is awesome. It is a little bit hazy but uh yeah it is still pretty cool.
Well, I'm having a very Korean drink. Honey lemon tea. Hahaha. Not at all. This is like a super popular in Nepal. I've been ordering this at every restaurant since I arrived. Sometimes they just do lemon honey. Sometimes there is ginger. And it is just a really nice drink when it is cool out.
And what are you having to drink? Well, I'm just going with a big bottle of water. Because I did see soju (소주) on the menu but when I looked on the price list it was the equivalent of about $15 US dollars. Yeah.
And that is fairly typical. I know soju (소주) is also really expensive in Canada so when it is imported the price really goes up. So I was thinking you know what? No. I can't. I really want it but after 15 bucks no.
I had to say no.
The food has arrived and I'm already spotting a few differences. I wouldn't say this is authentic Korean food but it does look pretty good.
And we're going to start with the banchan (반찬) which are the free refillable side dishes.
Next up we are moving on to the kimchijeon (김치전). Oh yeah.
Yeah, the kimchi jeon (김치전) which also looks like it is pajeon too. Yeah, I'm not seeing a whole lot of kimchi (김치). Haha. It looks more like pajeon than kimchijeon (김치전) which is the green onions.
And you know what I've found a little bit strange?
What?
He asked us if we wanted tuna in our kimchijeon (김치전)?
You know what? I don't think I've ever had tuna in jeon before.
You know what? This is pretty good.
So I got the Donkatsu (돈까스) and unlike most Tonkatsu (돈까스) that I order in Korea, I mean in fact you're usually not even given a choice, you usually almost always pork.
But I'm trying a chicken one for the first time. Yeah. And I can tell already that this is very very thin.
This is part of our Travel in South Korea video series showcasing Korean food, Korean culture and Korean cuisine.
Music in this video courtesy of Audio Network

Korean Food in Nepal at a Korean Restaurant in Pokhara 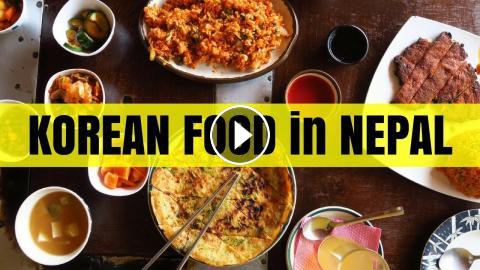 Come join us for lunch as we eat Korean food in Nepal at a Korean restaurant called Hanguk Sarang (한국 사랑) in Pokhara (पोखरा), Nepal (नेपाल). Although ...