111 Views
admin
Stories:
- Amazon Alexa comes to smartwatches with new crowdfunding project
- Apple has just let the secret slip about WWDC 2016 dates
- Dream of Apple Watch extended-battery strap killed as Apple shuts off port access
- Actual Moto G4 photos surface, starring front-fitted fingerprint sensor and redesigned rear
- LG Friends site opens up shop, redirects you to retailers
Watch today's Pocketnow Daily as we talk about the new Amazon Alexa-capable smartwatch that just started a campaign. Then we talk about Apple's confirmation of when we can expect WWDC 2016. The extended battery strap for the Apple Watch follows with some bad news. Then we focus on the next-generation Moto G that just reached leaks. We end today's show talking about LG's launch of the Friends for the LG G5.
All this and more after the break.
Subscribe:
About us:
Pocketnow has been a key source of mobile technology news and reviews since its establishment in 2000. With offices on three continents, Pocketnow offers round-the-clock coverage of the mobile technology landscape, from smartphones to tablets to wearables. We aim to be your number-one source for mobile tech news, reviews, comparisons, and commentary. If you love mobile as much as we do, be sure to subscribe!
Follow us: 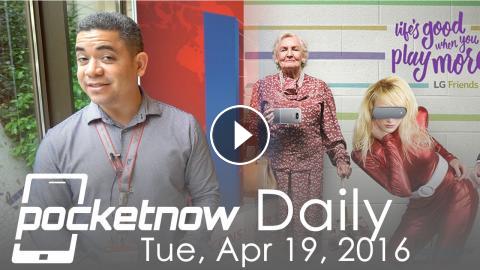