213 Views
admin
A little look around London and its fish n chips shops. Winston Churchill called them "the good companions". John Lennon smothered his in tomato ketchup and Michael Jackson liked them with mushy peas. Even Charles Dickens has written about them. Of course we are talking about Fish n Chips. There is nothing more British than fish and chips and no better place to take a look than the capital, Welcome to London. The first fish and chip shop was opened in London by Joseph Malin in 1860 and they continue to be a great London and of course British institution. Joseph's family were rug weavers. To increase the family income they had begun frying chips in a downstairs room of their house. It was Joseph's idea to combine the chips  -  at that point a novelty in London  -  with fish from a nearby fried fish shop. It was from that date that the combo of fried fish and Chips was born in London. The concept of a fish restaurant was introduced by Samuel Isaac who ran a thriving wholesale and retail fish business throughout London and the South of England in the latter part of the 19th century. Isaacs' first restaurant opened in London in 1896 serving fish and chips, bread and butter, and tea for nine pence, and its popularity ensured a rapid expansion of the chain. The restaurants were carpeted, had waited service, tablecloths, flowers, china and cutlery, and made the trappings of upmarket dining affordable to the working classes for the first time. They were located in Tottenham Court Road, St Pancras, The Strand, Hoxton, Shoreditch, Brixton and other London districts, as well as Clacton, Brighton, Ramsgate, Margate and other seaside resorts in southern England. Did you know that, During World War II fish and chips remained one of the few foods in the United Kingdom not subject to rationing Traditional frying uses beef dripping or lard; however, vegetable oils, such as peanut oil are now commonly used. When it comes to the batter on the fish, fish and chip shops traditionally use a simple water and flour batter, adding a little baking soda and a little vinegar to create lightness, as they create bubbles in the batter. Other recipes may use beer or milk batter, where these liquids are often substitutes for water. Beer also results in an orange-brown colour. But they are a great guarded secret in many chippys. The fish of choice is for sure Cod followed by Haddock and Rock Salmon. Plaice, Skate and other lesser known fish turn up on the menu as well. Salt n Vinegar are a must, now there are a few types of vinegar, my favourite being onion, but others like malt. Pickled onion and gherkins (also known as wollys) are a bit of a must, as are pickled eggs, although i am really not a fan of them. Mushy peas are another great favourite in London Chippys, unlike further north of the UK where chips and gravy are served. Fishcakes, pies, sausage in batter and saveloys are also widely on hand for people who are not in to eating whole fish. The Saveloy is basically a big hot dog type of sausage, don't ask what is in them…. Well that was our short trip around London to see fish n chips, see you again soon on How to cook great food .com
As part of the HOW TO COOK GREAT NETWORK -
Also take a look at our channel for other great cooking genres.
And look at the websites for in detail recipes, gallery and cooking tips. 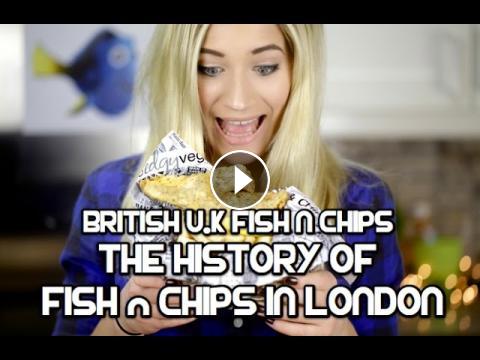 A little look around London and its fish n chips shops. Winston Churchill called them "the good companions". John Lennon smothered his in to...