“There’s this view of Dr. King leading the Montgomery bus boycott in 1955, or his ‘I Have a Dream’ speech at the Lincoln Memorial in 1963,” says Glaude, who delivered the University of Rochester’s annual Martin Luther King, Jr. Commemorative Address on January 24 at Strong Auditorium. “But we have to grapple with his later despair and disillusionment. In 1968, King was five years sadder and trying desperately to get the country to live up to its promise. He was trying to change the consciousness of America,. But nobody heard it, nobody cared.”

Glaude is the James S. McDonnell Distinguished University Professor at Princeton, and chair of the department of African American studies. He has written for the New York Times and Time magazine and has been a guest on MSNBC and NBC’s Meet the Press.

Glaude says “death rewrites the earlier moments of King’s life.” By the time of his murder, he says, King was disillusioned by the country’s direction, and the black power militancy exhibited by youths whose dreams of social equality had been dashed.

“The fact that he said on April 3, the day before he was murdered, ‘We have some difficult days ahead, and I may not get there with you.’’’ Glaude says. “He understood there were dark times in front of us before we could reach the promised land. He dedicated his life for the promise that America would live up to its stated commitments. When viewed from the lens of today, we still have a long way to go.”

Prior to his speech, Glaude met with University student leaders at Douglass Leadership House. He stressed that, while King is critical to the civil rights movement, those students—and millions of others—can fill that void.

“We long for a Dr. King or an Abe Lincoln, because we don’t see our own capabilities as being sufficient,” Glaude told the students. “History converged in a way that called Dr. King forward, and he answered the call. That can happen with anybody. We don’t need another Martin Luther King. We need every day ordinary people. We are the leaders we’ve been looking for.” 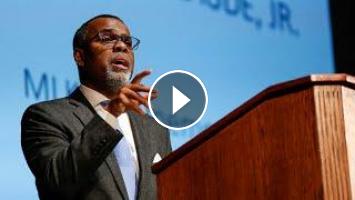