You may have faced some unpleasant situations silently and without any complaints.

The idiom 'grin and bear' means to accept a difficult situation without complaining or without showing how you feel about it.
In this idiom, the word 'grin' doesn't literally mean 'to smile'. It means to tolerate or accept something the way it is, even if you dislike it.

So when you grin and bear something painful or unpleasant, it means you are actually putting up a brave act however bad things may be. You remain quite calm and take things in your stride, and don't let them upset you.

For example, if you are out on a vacation and fall ill, you are unable to explore new places, as you have to be on bed rest for a few days. Your vacation turns out to be a disaster and you can do nothing about it. SO, you accept it the way it is. That means, you grin and bear with whatever has happened.

Example 01: Her parents' continuous quarreling made Janet upset as she could no longer grin and bear it.

Example 02: When Ben goes for his medical checkup, he always grins and bears to prove his bravery.

Example 03: Though Melissa dislikes her cousins, she had to grin and bear while conversing during the Christmas party.

Example 04: After the divorce, mother told Samantha, "You have to grin and bear with everything for your child's sake."

Example 05: Although he felt insulted, Sam tried hard to grin and bear when his colleague yelled at him.

Example 06: Being their first date, Marc decided to grin and bear when he realized how long she had kept him waiting.

Example 07: To sustain her job, Kelly had to grin and bear with the work load at the office.

Example 08: Though he was extremely busy at work, Kevin had to grin and bear with his girlfriend's nagging over the phone.

Example 09: After Danny's girlfriend moved to a new city, he had no choice but to grin and bear even though he missed her a lot.

Example 10: When her friends tease and bully her, Tyrene always grins and bears rather than reacting to them.

When do you grin and bear? How do you feel when you do so? 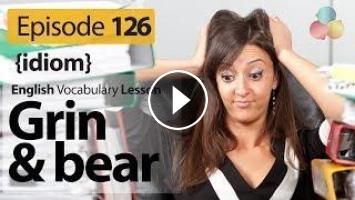