ava
Come join us for Korean Food in Tokyo, Japan as we head over to Koreatown where we wander around and end up trying Cheese Dakgalbi and Bingsu for lunch before heading over to another restaurant to cool down with Bingsu for dessert.

For those who have never tried this type of Korean food Cheese Dakgalbi (닭갈비) is a spicy chicken Korean barbecue featuring rice cakes, tonnes of cheese and vegetables cooked over a heating element. It is absolutely delcious and originates from Chuncheon, South Korea. We noticed after walking around Koreatown in Tokyo, Japan that this type of restaurant was the most popular thing to eat in the neighborhood. As we finished the first part of our meal we left a bit of chicken and cheese to be turned into Korean fried rice which was amazing.

Somehow with our eyes always being bigger than our stomaches, we had enough room to eat Bingsu (빙수) for dessert. If you're located in or around Shinjuku when visiting Tokyo be sure to check out Koreatown to try delicious Korean food.

Here we are out in Koreatown. We figured if it is already hot let's go have some hot spicy food, so Sam suggested Cheese Dakgalbi (닭갈비) which is a Korean dish. I mean it has lots of cheese so it has to be good. Iit is a meal where we're going to turn up the heat. I hope you guys enjoy it.

So how can you tell we've arrived in Koreatown? I have a few clues for you guys. First up K-Pop music is blasting. Also, so many Korean makeup stores selling Korean cosmetics. Of course lots of Korean restaurants and that is exactly what we are looking for.

We're going to have the cheese dakgalbi (닭갈비) with the Bokkumbap which is going to be fried rice cooked at the very end. With all of the cheese that is leftover from this.

It is cool because they've already brought the heating element. The cooking element here. Yeah. Which the dakgalbi (닭갈비) will be cooked on.

A random fact I have from when I was living in Korea. Is that this is from Chuncheon.

It is time to dig in. I'm so excited. I'm going to grab. Bubbling goodness. I don't even know what to grab. Should I start with veggies?

Go for the veggies and mix it with that cheese. So let's get some cabbage and onions. Nice cheesy bite. Look at that.

It is just strings of cheese. We've got these little plates. You know it would probably be a good idea to grab our spoons and like scoop it out so we're not burning ourselves.

It is hot but so good.

I just love all of the flavors like that gochujang sauce.

The chicken is so tender and so juicy it has really been absorbing the flavors of the sauce. The spiciness. The sweetness.

This is my absolute favorite part. This is the Korean stir-fry rice. The bokkeumbap and this is the most delicious kind of bookumbap you can have because it is absorbing the chicken, the cheese flavors and also the rice sizzling at the bottom.

That was a wonderful meal. I've got a big candy in my mouth. But as you can see looking down at the pan we ate it all. All of that crispy cheese. Let's get to price point. The total was 2592 Yen which came to $23 US dollars.

Since we are in Koreatown and we had a Korean lunch it only makes sense to have a Korean dessert. And right now we're at a place called Snowy Village and we are eating Bingsu (빙수). Bingsu (팥빙수) is something that we used to eat a lot in Korea during the summer months.

It is like shaved ice and you can get a whole bunch of different toppings. Today we went for Oreo and whipped cream and there is also condensed milk in there. You can get it with mangoes, strawberries, blueberries, blackberries, cheesecake flavored.

This is delicious. Very refreshing. And a reasonable price too. It came to 970 Yen which is probably about $9 US dollars. This is for the two of us to share.

This is part of our Travel in Japan video series showcasing Japanese food, Japanese culture and Japanese cuisine. 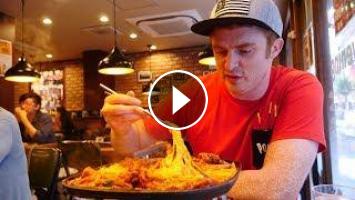 Come join us for Korean Food in Tokyo, Japan as we head over to Koreatown where we wander around and end up trying Cheese Dakgalbi and Bingsu for lunc...