Busan sits on the Korean Peninsula’s southern coastline, just a short flight from Asian capitals like Beijing and Tokyo.
Busan’s coastline offers scenery to match your every mood. Just a 40-minute subway ride from Busan Station is the city’s star attraction, Haeundae Beach. For total relaxation, unroll your towel on the half-moon curve of Gwangalli Beach. Seeking a little enlightenment? Make a wish at Haedong Yonggungsa Temple, one of the few temples in Korea built by the ocean.
While Busan’s story has been shaped by the sea, it’s a city equally defined by its mountains. On Mt Cheonma, hike to the observation platform to see “Dynamic Busan” spread out before you. In the city’s north, ride the cable car to Geumgang Park, home to Busan’s highest peak.
During the Korean War, Busan became a safe haven for refugees who built their makeshift homes on the city's steep hillsides. After years of keeping their noses to the grindstone, the residents of Gamcheon have embraced their creative side, transforming their neighborhood into one of the city’s top tourist attractions.
Gamcheon’s makeover symbolizes Busan’s new-found creative energy. See this energy in its world-class museums, galleries and festivals. Hear it in the bustle of its shopping streets. Taste it in a cuisine, which lures foodies from all over the globe. And feel it, as the city erupts in light each night, just like the displays of its annual lantern festival.
Welcome to Busan, a feast for all the senses, and the soul. 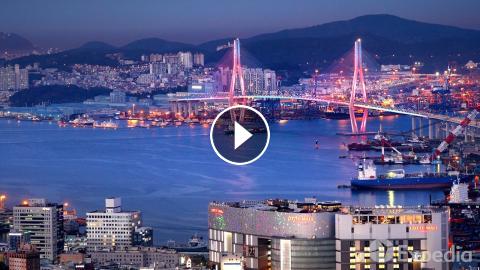