ava
¡Bienvenidos a Mendoza!, the “The Land of Sun and Good Wine.”

Located on an arid plateau, Mendoza was built on the irrigation channels, or “acequias,” that were originally dug by the indigenous Huarpe people. These waterways also feed snowmelt from the Andes to Mendoza's vineyards, which produce about the majority of Argentina’s wine today.

As seen from above, Mendoza’s most central parks take on the shape of a dotted number five, like the on dice. The leafy Plaza Independencia, with has an underground modern art museum, makes up the central dot and the corners are formed by the Plaza Italia, Plaza General San Martín, Plaza España and Plaza Chile, with their richly decorated statues and fountains.

Just west of the city center is the biggest park of all: Parque General San Martín. It’s overlooked by the grand Monument for the Army of the Andes atop El Cerro de la Gloria.

Visit this “Eden of the Andes” during the annual Grape Harvest Festival, Vendimia, to see Mendoza in full swing. 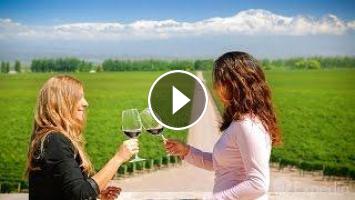 ¡Bienvenidos a Mendoza!, the “The Land of Sun and Good Wine.” Located on an arid plateau, Mendoza was built on the irrigation channels, or “acequias,”...