The Austrian city of Salzburg is situated on the northern edge of the Alps, close to the border of Germany. Surrounded by lakes and mountains, and straddling the banks of the Salzach River, few cities can match Salzburg’s fairytale setting.

Few places can match its musical heritage either. Salzburg is the hometown of Wolfgang Amadeus Mozart, and provided the settings for one of cinema’s most-adored musicals, The Sound Of Music.

Take the funicular to Hohensalzburg, one of Europe’s best-preserved medieval fortresses. Down below in the Old Town you’ll find Salzburg Cathedral and the Salzburg Museum. Nearby, wander along narrow Getreidegasse, one of the loveliest shopping streets in the world.

Just off the Old Market Square, savor 300 years of coffee-making tradition at Café Tomaselli. For classical Austrian fare served with a side of Opera, take the short walk to Stiftskeller St. Peter. At the Müllner Bräu Brewery, hang out with beer devotees from all over the world.

Salzburg has long been a city where inspiration knows no bounds, especially when it comes to its palaces. Just a short stroll from the Marionette Theater, the grandeur of Mirabell Palace and Gardens awaits. While on Salzburg’s southern outskirts, explore the playful water features at Hellbrunn Palace.

While Salzburg abounds with fountains, some of the city’s most impressive water features are its natural ones, such as Lake Wolfgang and Krimml Waterfall. For a waterfall with a difference, visit the spa town of Bad Gastein, whose falls roar straight through the heart of town. From the town, take the cable car to the summit of Stubnerkogel Mountain and walk Europe’s highest suspension bridge.

The Salzburg region is full of surprises, so before heading back to the city, head underground, into the Hallein Salt Mine. From its salt mines to its symphonies, from its fountains to its waterfalls, Salzburg plays out like a living opera, filled with drama, comedy, intrigue and passion. 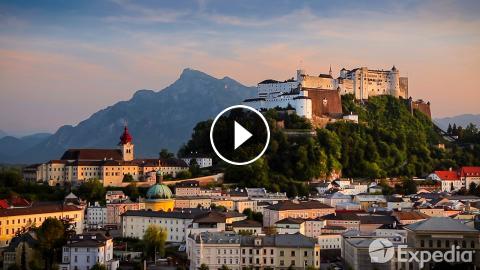 The Austrian city of Salzburg is situated on the northern edge of the Alps, close to the border of Germany. Surrounded by lakes and mountains, and str...