Welcome to Seoul, the capital of South Korea. Start your adventure at the K-Style Hub, a state-of-the-art visitor centre where South Korea’s past, present and future converge.

At the head of Gwanghwamun Square sits the statue of Sejong the Great, whose reign oversaw a golden age of literature, science and technology. The great leader sits before the grandest of Seoul’s five royal palaces, Gyeongbokgung, the Palace of Shining Happiness.

A short bus or subway ride to the east, are the adjoining palaces of Changdeokgung and Changgyeongung, while just to the south at Deoksugung Palace, see the changing of the guard which takes place three times each day.
Just to the west, is the last of Seoul’s great palaces, Gyeonghuigung, a royal refuge in times of unrest.

After exploring Seoul’s temple complexes, see how ordinary Koreans once lived at the Namsangol Hanok Village. Then explore the Korea Furniture Museum where over 2000 exquisite items of furniture are displayed within ten traditional houses. The story of Korean craftsmanship continues at the National Museum of Korea, which houses national treasures such as the Ten Story Pagoda.

Close to Seoul’s great South Gate is Namdaemun Market, where locals have been bargaining hard for over 600 years. Looking for some Gangnam style? Head just upriver to Samseong-dong, the Beverly Hills of Seoul.

Spend a few hours in the wooded surrounds of the Bongeunsa Buddhist Temple, a peaceful antidote to the fierce pace of Seoul’s shopping. Then hike to the peak of Namsan, and take in the sweeping views from Seoul’s iconic tower. When the sun gets low, join locals on the banks of the Han River to see the Banpo Bridge erupt in waves of water and light. 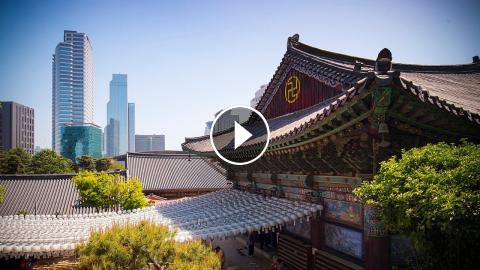 Welcome to Seoul, the capital of South Korea. Start your adventure at the K-Style Hub, a state-of-the-art visitor centre where South Korea’s past, pre...