It’s only 93 miles from Florida, and just 13 from the Bahamas, but like the smoke that coils from its legendary cigars, The Republic of Cuba exists in a time and space all its own.

Few cities can stir the imagination like Cuba’s capital, Havana, a city preserved by forts, a five-mile seawall, and an imposed embargo, which held back the excesses of the 20th century for over 50 years.

Havana’s lure can be hard to resist, but Cuba offers so much more beyond the seductive lights of its capital. In Cuba, a long sandy beach is never far away.

Just 12 miles from Havana’s downtown, the Eastern Beaches unroll toward the town of Matanzas, the birthplace of the rumba, and Cárdenas, where the Cuban Flag flew for the very first time. From here, follow the scent of fresh lime, rum and suntan lotion north to Varadero.

After exploring the northern coastline, turn south towards Cuba’s most revolutionary city, Santa Clara, and Trinidad, once the sugar capital of the world. Don’t miss elegant Cienfuegos, the only Cuban city founded by the French.

Sometimes it’s hard to know whether Cuba is awakening to the world, or if the world is awakening to Cuba. Whatever your politics, it's easy to admire this island nation that has proudly gone its own way.

Cuba may still have one foot firmly in the past, but as the world tumbles towards tomorrow, we can be thankful for the many things it has not let go. 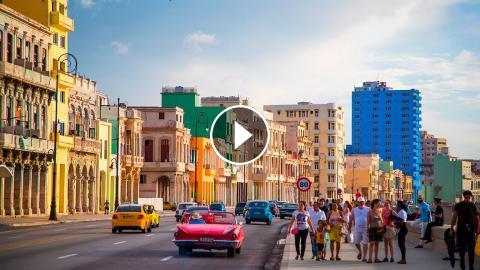 It’s only 93 miles from Florida, and just 13 from the Bahamas, but like the smoke that coils from its legendary cigars, The Republic of Cuba exists in...