Finland’s thriving waterfront capital, Helsinki, is situated at the northeastern edge of the Baltic Sea between Sweden and Russia.
Start voyaging through Helsinki’s history by taking the ferry from Market Square to Suomenlinna Fortress, the battlements of which have protected the Gulf of Finland for almost 300 years.
Helsinki has an abundance of museums and galleries across the city, including the Helsinki Design Museum, which features a permanent exhibition devoted to the great moments of Finnish design.
Continue your design journey at Temppeliaukio Church, a favorite with touring musicians. Helsinki is home to many structures dedicated to theatrical and musical productions. Two of the most iconic are Finlandia Hall and the Helsinki Music Centre.
Wander through Esplanadi, often referred to as the living room of the city. From here, walk north to Senate Square, which fans out from the fatherly gaze of Emperor Alexander II.
Climb the stairs to the foot of Helsinki Cathedral, a breathtaking whitewashed structure that towers above the rest of the city. Stare up at the twelve apostles, ten-foot-tall zinc statues which stand like wise custodians.
In stark contrast to Helsinki Cathedral is its brooding younger brother, Uspenski Cathedral. Built with dark bricks, the cathedral is powerfully conspicuous as it rises from the surrounding white granite of the Katajanokka district.
Celebrations of education and creativity mean Helsinki is a city designed for life. Its long-held reputation as one of the world’s happiest places lures people from all over the world. And now, it is calling to you. 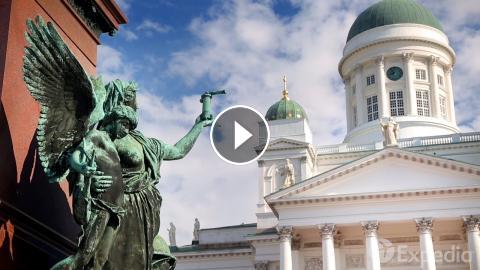 Finland’s thriving waterfront capital, Helsinki, is situated at the northeastern edge of the Baltic Sea between Sweden and Russia.Start voyaging throu...