The ancient Greeks knew Jordan’s capital, Amman, as Philadelphia, the city of brotherly love. Overlooking Amman is the Citadel, the city’s ancient core. Rising over the Citadel are the remaining pillars of the Temple of Hercules, a Roman temple that in its day dwarfed many in Ancient Rome.

From Amman, journey north to Jerash, home to one of the largest concentrations of Roman ruins outside Italy. Then, continue north to Ajloun Castle, built to halt the Crusader armies as they rode down Jordan’s northern valley, hell-bent on Jerusalem.

Enter the gravel plains of the Eastern Desert and follow the Desert Castle Loop. For many, the highlight here is Qasr al-Azraq, where Lawrence of Arabia made his winter headquarters.

Travel south to Madaba, famed for the Madaba Map, one of the earliest depictions of the Holy Lands. Continue south along the Kings Highway, which once took Arabs to Mecca, and Israelites to the Promised Land.

Follow the hairpin road 1300 feet below sea level to the Dead Sea. Float in the saline waters and cover yourself in the same mineral-rich muds Cleopatra once enjoyed.

No visit to Jordan is complete without a visit to Petra. Emerge from the shadows of the Siq and gaze up at the Treasury, the greatest of all of Petra’s 500 tombs. Then continue south to explore the emptiness of Wadi Rum.

From epic landscapes to monumental ruins, Jordan allows us to reach out and touch the eternal, and be at one with something far greater than ourselves. 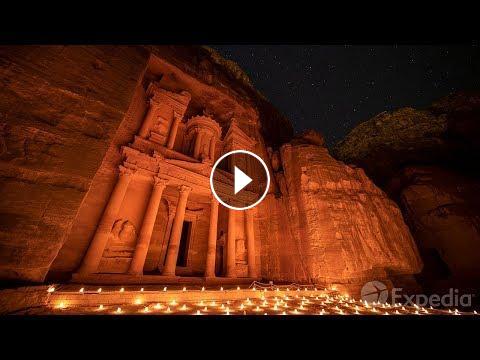 The ancient Greeks knew Jordan’s capital, Amman, as Philadelphia, the city of brotherly love. Overlooking Amman is the Citadel, the city’s ancient cor...