Mérida is the capital of the Mexican state of Yucatan. While much of the peninsula is famed for its resorts, Mérida is the epicentre of Yucatan culture, history and pride.

Radiating from Plaza Grande are pastel streets filled with architectural treasures and cool parks. In the late 1800s, Yucatan became the centre of henequen production, and Mérida fast became one of the world’s wealthiest cities. Take a walk up Paseo de Montejo, an avenue inspired by the great boulevards of Paris, where Yucatan’s elite built their stately homes.

Mérida is filled with windows into the past, including its many museums, which cover everything from Yucatan song to the folk arts of Mexico. Just a short walk south from Plaza Grande is the Museum of The City of Merida, which charts the rich and sometimes turbulent history of Yucatan’s capital.

Once the residence of a former governor and general, Palacio Cantón is now home to Yucatan’s Anthropology and History Museum. While nearby, the Great Museum of the Mayan World creates a striking contrast to Mérida’s historic streetscapes.

Mérida is surrounded by ancient Mayan cities such as Dzibilchaltun, Mayapan,
Uxmal, and Chichén Itza. The Yucatan Peninsula has also been blessed with an incredible network of over 6000 cenotes. Some, such as the Sacred Cenote of Chichén Itza, were considered portals to the afterlife. Today, many of these cenotes are the perfect places to cool off.

But of course, there’s nowhere better to wash away the Yucatan dust than back in Mérida, one of the most cultural, historic and coolest cities in all of Mexico. 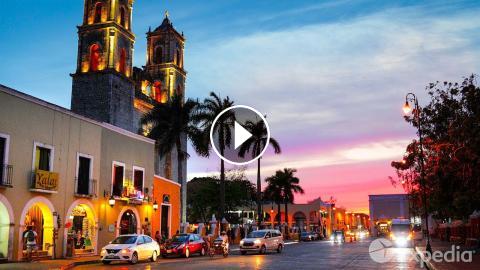