The Croatian city of Dubrovnik is one of Europe’s most enduring treasures. Cross the medieval bridge and enter the Old Town through Pile Gate, then climb the ramparts for a history lesson like no other.

It takes an hour or two to walk the Old Town’s ramparts. At Fort Bokar, take in the views to Fort Lawrence, then follow the sea wall to St John’s Fort, which once protected the City Harbor from enemy ships. Explore Fort Revelin, which offers even more commanding views of the harbor, then continue on to the highest point in the city’s defenses, Fort Minceta.

Once you’ve arrived back at Pile Gate, descend into the streets of the Old Town. The town is divided in two by the Stradun, a street marked at each end by a bell tower and a fountain. Refresh yourself at Onofrio’s Fountain, then pay your respects at Saviour Church. Next door at the Franciscan Monastery, order an elixir from one of the world’s oldest functioning pharmacies.
At the Stradun’s eastern end, is Luza Square, where you’ll find treasures such Sponza Palace and Saint Blaise Church. After refilling your water bottle at the Small Onofrio’s Fountain, explore even more of the city’s sacred places, such as the Dominican Monastery and Dubrovnik Cathedral.

There’s also plenty to explore beyond the Old Town’s walls, such as Banje Beach, and Gruz harbor, where gigantic cruise ships have replaced the little trading vessels of old. 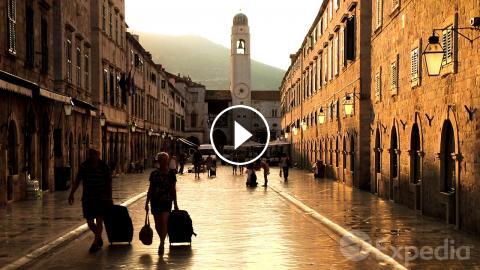 The Croatian city of Dubrovnik is one of Europe’s most enduring treasures. Cross the medieval bridge and enter the Old Town through Pile Gate, then cl...