The industrious Scots made their mark all over New Zealand, but nowhere is the Caledonian spirit more alive than in Dunedin. Set at the head of the South Island’s Otago Harbour, the city center is shaped by The Octagon.

From here, wander down Stuart Street to New Zealand’s most photographed building, Dunedin Railway Station. Just up the tracks, venture back in time at the Toitū Otago Settlers Museum, while just across town is the Otago Museum.

Retracing centuries of history can be thirsty work, so combine a little learning with leisure, at Speight’s Brewery, which has been serving up the Pride of the South since 1876. Then stretch your legs on St Clair Beach, a popular summertime hangout for generations of Dunedinites.

Rent a car and head into the peninsula’s hills to Larnach Castle. Further up the peninsula is the Ōtākou Marae, the hub of Ngāi Tahu cultural life. The peninsula comes to an end at Taiaroa Head, home to the world’s only mainland albatross breeding colony.

In Dunedin’s North, visit rare Yellow Eyed Penguins at Shag Point. Then just up the road at Hampden, marvel at the mysterious Moeraki Boulders. At the historic port town of Omaru, Victorian warehouses have become places where imaginations run free, earning the town the title of The Steampunk Capital of the World.

If it’s total isolation you’re yearning for, turn southward to the sparsely-populated Catlins Coast, and for even more adventures, head west into the rugged interior of Central Otago. 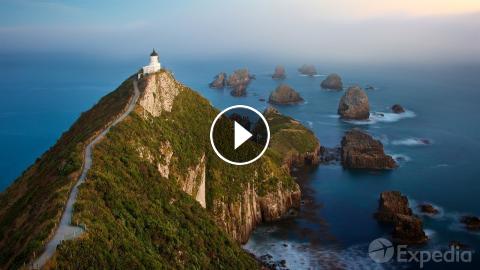 The industrious Scots made their mark all over New Zealand, but nowhere is the Caledonian spirit more alive than in Dunedin. Set at the head of the So...