The Republic of Vanuatu lies in the South Pacific Ocean, just a short flight from Australia and New Zealand.

Most visitors to Vanuatu arrive at the nation’s capital, Port Vila, situated on the main island of Efate. Vila, as it’s affectionately known, sits at the edge of a magnificent natural harbor filled with corals and sea life.

Like many South Pacific ports, Vila is wonderfully relaxed, so leave your designer gear at home, pull on some flip flops and slide into island time.

Just a ten-minute drive from port Vila, is Ekasup Cultural Village, where proud villagers are waiting to share their centuries-old customs, crafts, music and stories.

From Vila, take a 50-minute flight to Espiritu Santo. At the island’s sleepy capital Luganville, stock up on supplies at the markets, before venturing off to explore the island’s natural wonders.

After exploring mainland Santo, visit the islands off its southern coast, such as Aore Island, Bokissa Island and Malo Island.

Just a 45-minute flight south from Port Vila, Tanna Island is fringed with beaches ranging from pure white to black volcanic sands. Many of the hillside villages on Tanna remain largely unaffected by the trappings of the modern world. Feel the earth shake on Mt. Yasur, one of the world’s most active and accessible volcanoes.

After experiencing the warmth and generosity of Vanuatu’s people, it’s easy to feel that Vanuatu could be one of richest places on earth. 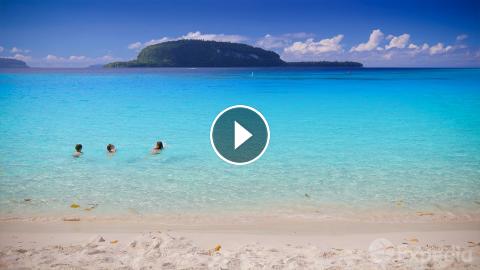 The Republic of Vanuatu lies in the South Pacific Ocean, just a short flight from Australia and New Zealand. Most visitors to Vanuatu arrive at the na...