184 Views
admin
Stories:
- Microsoft gets ready to release HoloLens dev kit early next year
- The Microsoft Band gets a refresh, new features, and price tag
- Meet the Lumia 950: Microsoft introduces its first Windows 10 phones
- Microsoft Lumia 950XL announced with monster specs
- Microsoft demos Continuum as Lumia killer feature
- Microsoft unveils its first laptop, the Surface Book – and it’s got a surprise convertible mode
- Microsoft launches the Surface Pro 4: thinner, more powerful than ever
Watch today's Pocketnow Daily as we talk about Microsoft's Lumia and Surface event, starting with new details on the company's HoloLens. Then we talk about the new Microsoft Band, and all the changes the company is implementing. Then we focus on the new Lumia flagships, which are the Lumia 950, Lumia 950XL, and we even talk about the new Lumia 550 as well. We then focus on all we learned about Microsoft Continuum, and why this is the killer app for Windows 10 Mobile. We end today's show talking about Microsoft's new Surface Pro 4 and Surface Book.
All this and more after the break.
Subscribe:
About us:
Pocketnow has been a key source of mobile technology news and reviews since its establishment in 2000. With offices on three continents, Pocketnow offers round-the-clock coverage of the mobile technology landscape, from smartphones to tablets to wearables. We aim to be your number-one source for mobile tech news, reviews, comparisons, and commentary. If you love mobile as much as we do, be sure to subscribe!
Follow us: 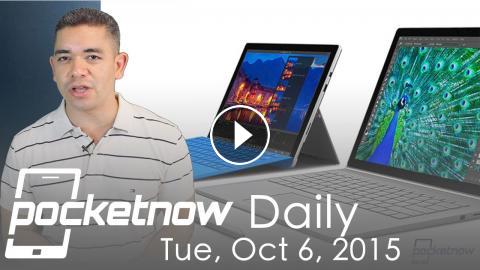 Stories:- Microsoft gets ready to release HoloLens dev kit early next year - The Microsoft Band gets a refresh, new features, and price tag - Meet the...