ava
United Nations Special Envoy for Syria, Staffan de Mistura speaks to the press following the meeting of the Humanitarian Access Task Force.
--------------
A constitutional committee for war-torn Syria will be the focus of talks at the UN in coming days, UN Special Envoy Staffan de Mistura said on Thursday, as senior officials from Russia, Turkey and Iran prepare to come to Geneva next week.
Speaking in the Swiss city, the veteran negotiator confirmed that he would be meeting representatives from all three countries to discuss how this future political body might be established.
Their input was needed, de Mistura explained, as they had co-sponsored discussions between Syrians in January at a Congress of National Dialogue in Sochi, Russia.
The outcome of that meeting was the Sochi Final Declaration; it calls for the establishment of a constitutional committee which should be represented by the Government of Syria, opposition representatives in the UN-led intra-Syrian talks, as well as Syrian experts, civil society, independents, tribal leaders and women.
De Mistura said “So I want to discuss with Iran, Russia, and Turkey some preliminary thinking and here they all use them too, on how the Sochi Final Statement can be given effect to and to seek their further guidance and support. I want to also, very much here, the opinion of the Syrian government and the opposition separately.”
Meanwhile, de Mistura also confirmed that he had received a list of names from the Government of Syria who could represent its interests in drawing up a future political framework for the country. The development was a welcome step, he told journalists: “Recently, the government of Syria officially conveyed to me, having also I presume discussed with both Russia and Iran, a list of 50 names. I conveyed to the government of Syria, via its own permanent representative here in Geneva, my acknowledgement and welcomed this step.”
The UN Special Envoy’s comments come amid what he described as “intensifying efforts” to push ahead with a mandate from the UN Security Council to secure a politically negotiated end to the Syrian conflict.
He said “I’m in the process, as you all know, of consultations and the reason is that we are intensifying our efforts to facilitate the way forward on the Syrian political process, as mandated by the Security Council and Resolution 2254.”
The development follows a whirlwind round of high-level meetings between de Mistura and countries that have influence on the outcome of the fighting in Syria – where seven years of fighting have claimed hundreds of thousands of lives and driven millions from their homes.
In addition to recent talks with representatives from Turkey, Iran and Egypt, de Mistura said he had also met “many Arab leaders” to discuss the ongoing conflict. The negotiator added that he had also held talks with officials from Russia and the European Union, as well as the United States, who confirmed that they will send a representative to Geneva on 25 June.
Other consultations are planned with representatives from Germany, Jordan and the UK, he said, before downplaying hopes of major diplomatic progress: “Bottom line, this is a Syrian-owned, Syrian-led UN facilitated effort that we are seeking and intending to carry forward. We are seeing movement and we will keep seeking more of it. I don’t expect, let’s be frank, a major breakthrough, okay, but I’m confident that progress is possible and there is something moving in that direction and we need to capitalize on it.” 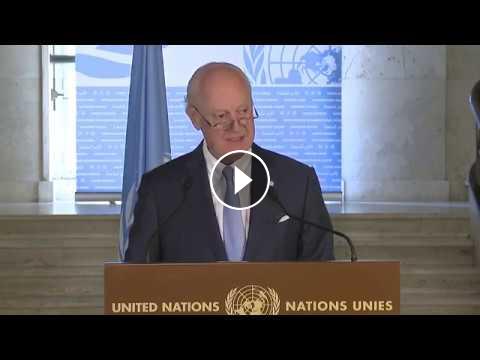